Saleh Mahdi, 8 times goalkeeper of Kuwait National teams, also wears grey track lower as Gabor Kiraly. It is not by accident, the 33 years old sportman is following the career of the hungarian rekorder . Interview with Saleh Mahdi.

Since when you know Gabor Kiraly?

-Since 1999. In Hertha Berlin games, I could see him on TV. I like his style, his professional saves.I asked my exgoalkeeper traineer Attila Bako , he told me many good things about him.

You wear always grey track lover on football matches like Kiraly. Since when?

-First time I used in 2002, but not so many times. Since 2010 until now I'm wearing the track. Becuase I'm too much comfortable with this style and it's special in Kuwait.

-Yes, i am following his career. I have Fulham goalkeeper dress, and I am reading the news about him. In 2013 I contacted him by phone and i was very happy, since that time i'm contacting him personly, and I am following his company K1RALYSPORT also. Im pleasure that I got 2 shirts from him by the coach Sándor Egervári and Elbert András.

What is about your career?

-I am goalkeeper of Alnaser Kuwait Club. My team is 10th right now in the first league.  But now it is freetime for us, because our national team in Austrila for Asia Cup and we will start games on 30/1/2015 only. I was national champion, 8 times member of the national team, captain of the team in Olympic Games Athens. In 2009/2010 I played in Hungary, in Budapest Honved also. I have family 2 daughters  and 1 son. My target by the time to be golakeeper coach.

* The best goalkeeper in the Championship club Cooperation Council, 1998-1999

* Best player in the month of November 2000 in Kuwait league

* 8 international matches with the Kuwaiti Team. 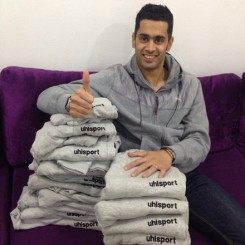 back to categories
Introduction

My name is Gabor Kiraly

92 times Hungarian National goalkeeper, with more than 750 professional games behind me.
My experience I have from England and Germany. Currently, I play also active by Fulham FC in Championship.My dream in childhood is in fulfillment as I now announcing that my International Goalkeeper school starts, where I expect you very much.

More
When a dream turns into truth...
Featured video
All videos